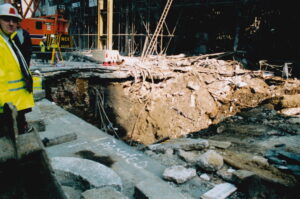 My favourite work showcases work from London Group members alongside the reason a work was chosen. I have selected my film Multi-story from 2014. I used to be a civil engineer and in 1993 helped to rebuild 80 Bishopsgate in the City of London after it was destroyed by an IRA bomb. In 2011, by now an artist, I discovered that 80 Bishopsgate was to be demolished to make way for a new City tower and gained permission to film the process. In the film Multi-story, the departed doppelgänger is gently redeemed, a memento mori to the spoil and fill of Capitalism. This was the first time I had felt able to revisit my former working life and was a catalyst for subsequent work.